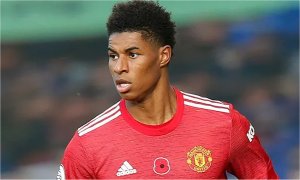 Marcus Rashford has twice forced the government into a change of heart over free school meals. Photograph: Magi Haroun/Rex/Shutterstock

Marcus Rashford is launching a book club and his own range of literature with the aim of giving children from lower socio-economic backgrounds the opportunity to embrace reading from an early age.

The Manchester United and England footballer is working with Macmillan Children’s Books (MCB) to promote reading and literacy among children from all backgrounds, and he talked about his own lack of access to books as a child.

Rashford said as a child his family had to prioritise food over books, and with the partnership he wanted to reach the “380,000 children across the UK today that have never owned a book”.

He said: “I only started reading at 17, and it completely changed my outlook and mentality. I just wish I was offered the opportunity to really engage with reading more as a child, but books were never a thing we could budget for as a family when we needed to put food on the table.

“There were times where the escapism of reading could have really helped me. I want this escapism for all children. Not just those that can afford it. We know there are over 380,000 children across the UK today that have never owned a book, children that are in vulnerable environments.”

MCB said there would be a particular focus on getting books into the hands of children from vulnerable and underprivileged backgrounds, and Rashford said his own books would “always will be, for every child, even if I have to deliver them myself.”

The first book to be released, in May 2021, will be You Are A Champion: Unlock Your Potential, Find Your Voice And Be the Best You Can Be. Each chapter of the book will begin with a story from Rashford’s own life and cover topics such as the value of education, positive mentality, understanding culture and female role models.

It will be co-created with the journalist Carl Anka and the performance psychologist Katie Warriner, who has worked with the Bath rugby union team. Two fiction titles for readers aged seven and up will follow later in 2021 and 2022, while next year the Marcus Rashford Book Club will launch.

In the summer, research by the National Literacy Trust found that last year only 26% of under-18s spent time reading each day – the lowest daily level recorded since the charity first surveyed children’s reading habits in 2005. The poet and former children’s laureate Michael Rosen said the findings should act as a “wake-up call for the government”.

Rashford said books should have diverse characters as this allows children to relate to characters by making sure people of all race, religion and gender are depicted correctly and representative of modern society. “No matter where you grow up, talent should be recognised and championed,” he added.

His campaigning on the issue of child food poverty led to a government U-turn on free meals, which will now be provided to disadvantaged children over the Christmas holidays.

The prime minister’s official spokesman called the book initiative “fantastic” while praising Rashford for shining a light on the power that books have and allowing more children to benefit from “the enjoyment which books bring”.

In 2018, the rapper Stormzy announced a partnership with Penguin Random House to set up his imprint #Merky Books, which is publishing Malorie Blackman’s memoir in 2022 and has already put out Stormzy’s Rise Up, Chelsea Kwakye and Ore Ogunbiyi’s Taking Up Space, and the verse novel by Derek Owusu, That Reminds Me.

Antoine de Saint-Exupery – The Little Prince
The classic story ranked highly in a Penguin readers’ poll of favourite children’s books with fans calling it “a beautiful lesson about the beauty of life and relationships, so precious and fragile at the same time”.

Dr Seuss – The Cat in the Hat
Named as the best children’s book in a recent TimeOut survey, the classic story of a verbose feline is aimed at three- to seven-year-olds and described as “a wonderful literary romp that should inspire a lifetime love of books”.

Ellen Raskin – The Westing Game
Gone Girl author Gillian Flynn named The Westing Game as a book that “completely charmed” her as a child and got her hooked reading. Flynn is one of a number of high-profile fans of the mystery novel and said she still reads Ellen Raskin’s 1978 book once a year.

Matthew A Cherry and Vashti Harrison – Hair Love
Inspired by the experiences of a group of young parents and based on the Oscar-winning short film, this story of a father learning to do his daughter’s hair is part of a new generation of children’s stories told through a black lens.