To my great shock and disappointment Hayfield House was no longer there when I made my first visit in 2006. It had been demolished four years previously. All I saw was a green mound. I needed to know what had happened. It was like an unsolved case of murder to be re-opened. 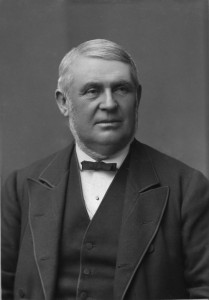 The Turton family, my father’s family, had built it in 1869 and lived in it for over fifty years. In most respects what happened after about 1922 has nothing to do with the Turton family. But it was still the house that William Turton (1825-1900) built, despite no doubt many internal alterations.

It was a large house built by a Leeds man who had risen from poverty to be a wealthy corn and hay merchant, coal merchant, bus owner and horse-tramway entrepreneur all over the north of England. I was curious. His life was little known by the generations that followed. It was mystery and the more I learned the more I felt that I wanted to lay to rest the ghost of Hayfield House.

The social history of a house or a street is a good way to start looking into community history. Chapeltown Road is a long road with many streets and terraces running off it to east and west. As its name suggests it is the road from Leeds town centre to Chapeltown and Chapel Allerton. It has come to define a region extending all along its length. At its southern end Sheepscar is the northern edge of the modern city centre and is on a more or less direct line south to Leeds Bridge via North Street, New Briggate and Briggate itself, the historic core of Leeds. William Turton owned or leased properties right along this line and his trams and buses served it.

When Turton built Hayfield House in 1869 it was in the countryside. The fields were used to graze dairy cattle and grow rhubarb. It was part of Leeds Borough but not of Leeds Township. There were fields all round and a scattering of large houses, some set in parks. Stowell described the area in 1885 as having become ‘a sort of garden suburb’ with just a few streets containing ‘villas of a superior sort’. They included Reginald Terrace, Sholebrooke Avenue and Newton Grange. Even as late as 1894 a map shows no streets beyond Reginald Terrace and Scott Hall Road downhill to the south west.

Gordon Stowell writes his semi-fictional  ‘History of Button Hill [Chapeltown]’ (1929) about the period approximately 1885-1925 and documents in a literary way, great social change. In the first phase the newcomers were joining the first generation of ‘patriarchs’, who without any doubt included the Turton family. The new houses, semi-detached and terraced ‘town houses’ were occupied by comfortably off merchants and professionals. They were differentiated chiefly by religion, that is to say different kinds of Christianity: Anglican, United Methodists, Wesleyans, Presbyterians, Congregationalists, Baptists, Philadelphians, conservative Christians and Christian Socialists (among whom Stowell). 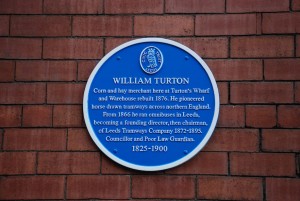 Pertinent to our story Stowell takes 1901 and the coming of the electric tram as the watershed year.1901 was the year Button Hill (Chapeltown) ceased to be ‘a horse-powered suburb’ served by the horse trams that my ancestor had managed as the longstanding Chairman of Leeds Tramways Company. It is the year in which Mrs. Bumpus goes off in a huff with her spaniels to live in Harrogate. It is the start of what Stowell calls ‘the inevitable ebb’ of Button Hill’s heyday.

When he returned from the First World War Stowell’s hero (himself) finds that ‘the glory that was Button Hill had dwindled and dwindled’.

The granite setts of Algernon [Reginalds] Terrace and Bilbrooke [Sholebrooke] Avenue are giving way beneath the wheels of twelve-ton trucks, and their pavements ring with the heavy boots of the proletariat …  A tram conductor and his family live in the house Mrs. Bumpus once occupied.

With the coming of the motor-bus a new turning point was reached:

Bathwater Road [Chapeltown Road, to ‘Bathwater Spa’, i.e. Harrogate] was now one single soulless stretch of tarmac surface, asserting the truth that Button Hill was no longer anything but place to be speeded through as quickly as possible on the way to more fashionable distant districts. 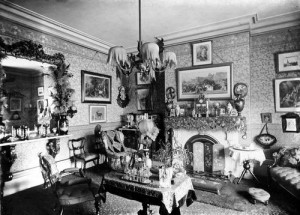 At the same time as this ‘proletarianisation’ began, there arrived many newcomers, this time differentiated by ethnic background. They were refugees from war-ravaged Eastern Europe. They identified themselves at first by their country of origin: Lithuania, Estonia, Poland, and Hungary. They were almost all however Jewish.  The period 1920 – 1970 or so was the period of highest Jewish population in the area, reaching more than 10,000 people. There had been Jews in Leeds for generations already. There was soon Cantor’s Fish and Chip Shop on the corner of Chapeltown and Harehills Avenue, almost directly opposite Hayfield House. It was popular with local non-Jewish people because it opened on Sunday and used vegetable oil. The shop still bears this name but it is closed on Sundays and serves southern fried chicken. Synagogues began to be built, some of them serving particular language groups, such as the Spanish and Portuguese synagogues.