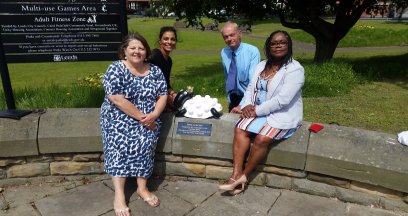 Councillors Eileen Taylor and Jane Dowson with the sheep as it is re-located to Norma Hutchinson Park.

Norma Hutchinson Park has just become home to a lost sheep, in the form of a statue that has been relocated. The statue was designed by the Free2Bme youth group and had been located at the Palace Community Centre on the aptly named Shepard’s Lane. However, when the Centre was brought back into use as housing the sheep had nowhere to go. Determined to keep what has become a bit of a local mascot in the community, Councillors Jane Dowson, Eileen Taylor and Mohammed Rafique stepped in and were able to see the sheep re-homed at Norma Hutchinson Park, alongside members of the original Free2Bme youth group. Councillor Jane Dowson (Labour, Chapel Allerton) said: “This sheep has a special place in the hearts of Chapeltown residents and we couldn’t sit back and watch it be lost to the community. We were delighted to be able to come along and see it settled into its new home. I am sure that it will continue to bring a smile to the faces of many more generations of Chapeltown residents. This, along with the tiled wall and innovative fence artwork is really cementing the reputation of Chapeltown Road as a corridor for arts in the city.” Councillor Eileen Taylor (Labour, Chapel Allerton) added: “This sheep is part of the history of Chapeltown and the fact that it was designed by a local youth group makes it even more special. It can’t fail to cheer up everyone who sees it and I know that children in particular love coming to pet it.”