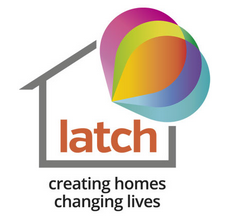 Randolph Morton from LATCH kindly gave us an interview to tell us more about the organisation that he works for.

Please tell us about yourself and LATCH:
I started off my working career in engineering, but due to the miners strike actions during the 80’s I was made redundant. For a while I was in and out of jobs, trying to find my niche so to speak. I had been thinking about joinery so I went to college and retrained as a joiner.

I was self employed for about 18 months. After that I saw an advert in a newspaper for a site supervisor at LATCH. I got the job and started work at LATCH in Leeds, West Yorkshire.

LATCH is a housing support service and we offer people support in their homes.What we do is identify a house or flat for them, help them get into the property, and while they are in their new home we’ll help them with things like budgeting, setting up their utilities, and generally help them manage their home until they are capable of managing on their own. We have recently taken on a ‘floating support’ service which means we now offer these services to non-LATCH tenants.

We also offer our tenants support in any training that they may want to do or we try and help them get back into work. We can help them identify a training package or college that they may wish to go to in order to retrain. LATCH also offers it’s tenants job search facilities, we have computers in our office and also telephones that our tenants can use to look for work.

Another aspect of LATCH in Leeds, West Yorkshire is we do our own repairs and maintenance on our properties.We have a volunteers service and people can join this and help us repair and maintain LATCH’S properties.

We also have another project which we have recently started called the ‘Hands On’ project.On this project volunteers come and train in property maintenance and attend college.Our volunteers are helping us renovate an old derelict building that we will eventually use as a training workshop.

Please tell about your role at LATCH in Leeds, West Yorkshire:
My role has changed quite a lot. When I started I was a site supervisor during the project at 1 Leopold Street, when we converted that building into 6 separate units.

From there I started to look after the rents. This involved ensuring all of our tenants rents were up to date. Now as well as rents, I also do support work and I am training in housing management.

LATCH in Leeds, West Yorkshire was a collective until recently and everyone shared responsibility in running the project. Over the years LATCH has grown as an organisation, our housing stock has increased and we have all had to define our roles more clearly. This helps us a lot as we now each have responsibility for our individual roles. There is still much of the collective aspect within LATCH as we still have meetings to discuss things, but individually we are each responsible for different aspects of LATCH.

You mentioned number 1 Leopold Street. That project took place several years ago in the Chapeltown, Leeds area. Please could you tell us more about that project:
The ‘Number 1 project’ was a self build project. We took on over 100 LATCH trainees / volunteers, during the course of the project, some of whom, at the end of the project would be allowed to live in the property. In addition by the end of the project they would gain some experience in joinery, plumbing and electrical work. The ‘Number 1 project’ was an opportunity for people around Chapeltown and the general Leeds area, to get involved in bringing an old building back into use. Originally it was a school for girls. That was shut down and Leeds City Council took it over and turned it into flats. After a couple of years it fell into disrepair and this led to it becoming a derelict building. We bought it from Leeds City Council, gutted it and turned it into what it is today.

Please tell us what LATCH does for the Leeds community:
Although we are based in Chapeltown we have a lot of dealings with the Burley area and the Harehills area. We are hoping to expand, however as we are a small organisation we have to take our time. Hopefully in the near future, we will be able to expand into other areas in Leeds.At the moment we are able to offer placements and volunteer opportunities to anyone in the Leeds area. Anyone wishing to volunteer is more than welcome. This is the same for placements as we do get placements from schools in and around the Leeds area.

Please could you tell us about the ‘Hands On Project’ that you mentioned earlier:
The ‘Hands On Project’ is one of the new objectives of LATCH. We are hoping to become more self sufficient and not have to rely on funding from other organisations. That’s the reason why we started it. Our project co-ordinator Mags Shevlin is the best person to speak to about that.

Our final question is what does the future hold for LATCH:
One of our aims is for LATCH to be more recognised within the Leeds community. Over the years we have gained recognition within the Chapeltown area, however we would still like to be more involved in the community in the sense that we would like to become more involved with other local organisations, although we do have a good rapport with them. We would like to see LATCH expand more and become self sufficient.We would also like to improve our housing stock. Over the years we have tried to improve the look of our homes, and bring them more up to date in terms of new central heating systems and that kind of thing.

The future is looking good for LATCH in Leeds, West Yorkshire, and we have a very good 5 year plan in place, which should hopefully increase our housing stock and as we take on more properties we can then offer more constructive jobs, placements and volunteer positions.

Thanks very much to Randolph for this interview.